Following the treatment, water flows by gravity or mostly by pumping to water tanks in different supply zones which serve to regulate the morning and evening rush-hour consumption. Today, the filling of the tanks is automatic and computer controlled in the central control room of Vodakva. Then, water enters the water supply network and is delivered directly to customers.

Vodakva operates about 1,627 km of water networks, including 196 water tanks and 139 water pumping stations. The company supplies the drinking water to 190,000 inhabitants of West Bohemia. Due to the lack of underground sources in this region, vast water distribution systems connected to a quality surface water source with a water treatment plant have been built since the middle of the twentieth century and have replaced former unreliable sources. Today about 90% of the population in the area operated by Vodakva is supplied from the four largest water systems, which are still being expanded:

Water Supply System of Karlovy Vary Region the most extensive one within the area operated by Vodakva. It delivers water supply to the cities of Karlovy Vary, Chodov, Ostrov (since 2002), Horní Slavkov (since 2005) and other municipalities in the region of Karlovy Vary and Sokolov – in total 30 municipalities and 116,633 inhabitants. i.e. a third of the population of the whole Karlovy Vary Region. This water supply system is 658 km long; water for this system comes from the Water Treatment Plant Březová (source Stanovice Reservoir). The system uses also other small sources - WTP Myslivny, springs Hřebečná and Boží Dar. 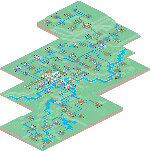 Water Supply System Žlutice - Toužim delivers water to the south part of the region of Karlovy Vary, in total 15 municipalities and 15,805 inhabitants. In 2004 the system was extended to the regions of Teplá and Bezdružice. The source of water for this system is the Water Treatment Plant Žlutice, the length is 268 km.

Water Supply System Tachov-Bor- Planá delivers water to 14 municipalities in the region of Tachov. The source of water for this system is the Water Treatment Plant Svobodka and Branka spring field. The system is 224 km long; the number of supplied inhabitants is 22,429.

Water Supply System Stříbro delivers water to the cities of  Stříbro, Kladruby and Vrbice in the region of Tachov – total of 9,038 supplied inhabitants. The supply system is 62,5 km long; the source of water is the Water Treatment Plant Milíkov.

Beside these huge water supply systems, Vodakva also operates many small individual distribution networks with local sources which deliver water to one or two municipalities.